NOTICE:  If you are not a free registered member of the site, you will not see the photos in the forum, and you won't be able to access our premium member content. Please consider joining our community!

Getting my DT400C up to snuff

Posts: 14
Less More
Likes received: 5
Topic Author
Getting my DT400C up to snuff #1
First, I'll start with a photo of my bike. It's nothing we haven't seen 1000 times, but I think it looks pretty good. Some sort of aftermarket seat cover and a rusty exhaust. Missing turn signals, but otherwise pretty complete and 'left alone.' 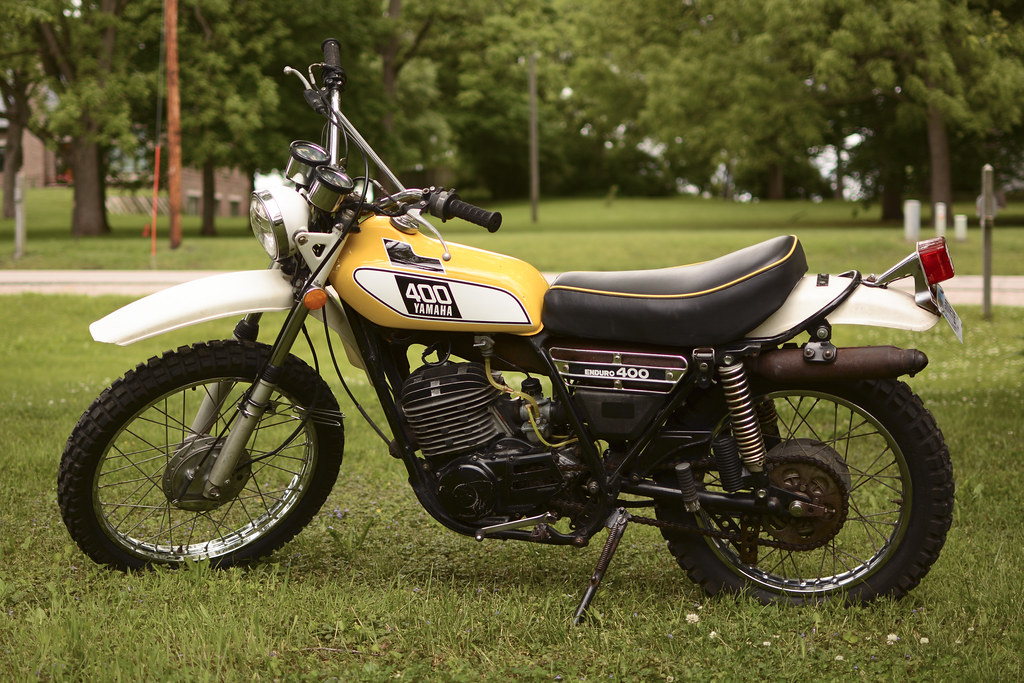 I should also mention that the person that owned it before me modified it by removing the CDI in favor of DT250 breaker points ignition. It looks like that meant also purchasing a different flywheel and stator. They installed a new top-end with a 2mm overbore (seems drastic to me) and an unknown piston maker. They made notes that the timing was set to 2.9mm BTDC but that the bike wouldn't surge if it was set at 1.9mm.

Here's a photo of that sheet of information I got with the bike. 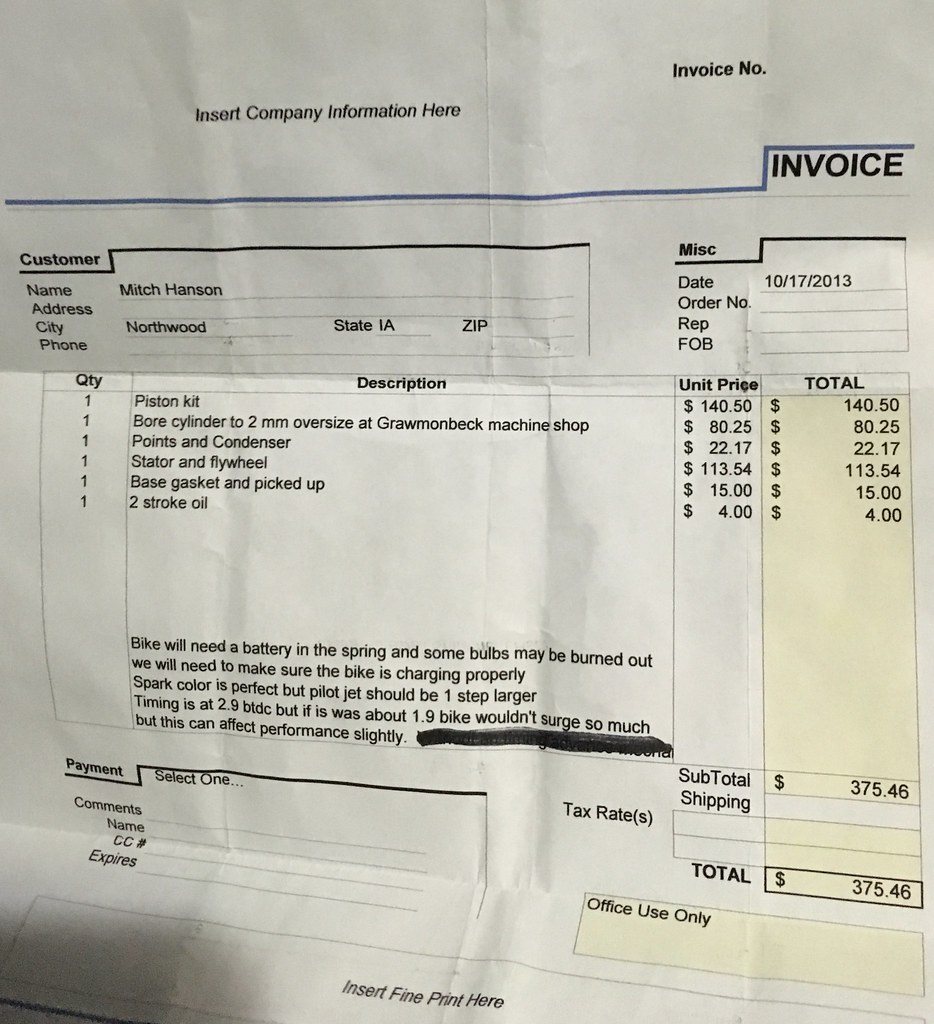 So this leads me into the part where I start to ask questions. First and foremost, my intake joint looks like time has taken its toll on the rubber. I read another thread that mentioned cleaning the joint and smearing black silicone into the cracks and over the surface. I'm definitely going to be doing that this weekend. 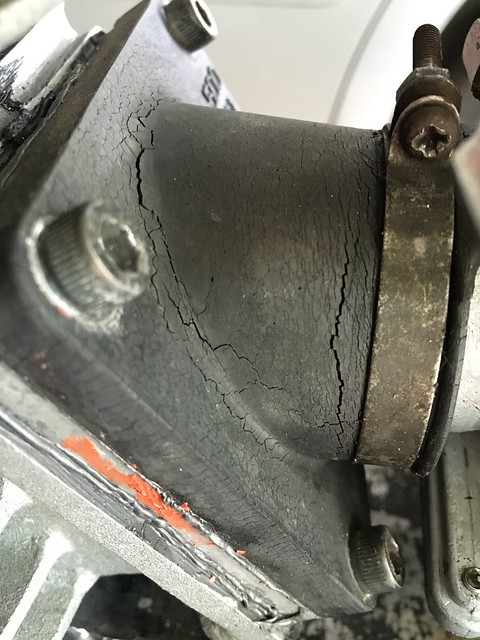 I feel like the tuning notes that mentioned retarding the timing to 1.9mm may have been due to a small air leak somewhere that has yet to be found. I did a quick test with carb cleaner while the bike was idling warm and didn't find any air leaks at the intake joint or top of the carburetor. I have yet to dig in far enough to investigate the condition of the stator side engine seal. The transmission side seems OK. The oil in there hasn't been disappearing while I've been riding (I haven't ridden it much) but it's not noticeably taking on transmission oil into the cylinder. I haven't removed the carburetor yet because I don't want the intake joint to crumble in my hands. I want to see what pilot jet, main jet, and slide needle are in there.

My primary issue at the moment is that the bike surges at mid throttle. I've made a video to demonstrate this here:

Otherwise the bike starts, idles, and accelerates really well. It's just trying to maintain speed or at constant throttle where it bucks and surges.

That's where I'll end this post. I don't know much more about the bike yet. I'm pouring over the owners and service manuals to teach myself about it. I've never owned a DT before, but I have owned several other bikes. I'm not a mechanic, but I play one on the nights and weekends.
The following user(s) Liked this Post JayB

If you aint mixin gas " you aint haulin Ass

Posts: 14
Less More
Likes received: 5
Topic Author
Getting my DT400C up to snuff #3
I set the air screw to 1.5 turns out. It was set at something like 3/4 turns out when I got the bike. It doesn't really seem to run that differently at either setting. Maybe less surging now, but also takes a bit longer to warm up maybe? It was almost like you could start the bike off choke when cold with the screw in more. Just from my initial impression.

But it's at 1.5 turns out right now. I did small adjustments with a screwdriver to see if I could get the idle speed to rise and fall and didn't really notice much happening.

If it moves and shouldn't , use duct tape. If it doesn't move and should, use liquid wrench.

Posts: 14
Less More
Likes received: 5
Topic Author
Getting my DT400C up to snuff #5
Tonight I took the carburetor off to inspect the internal parts. It looks like it's been cleaned recently. 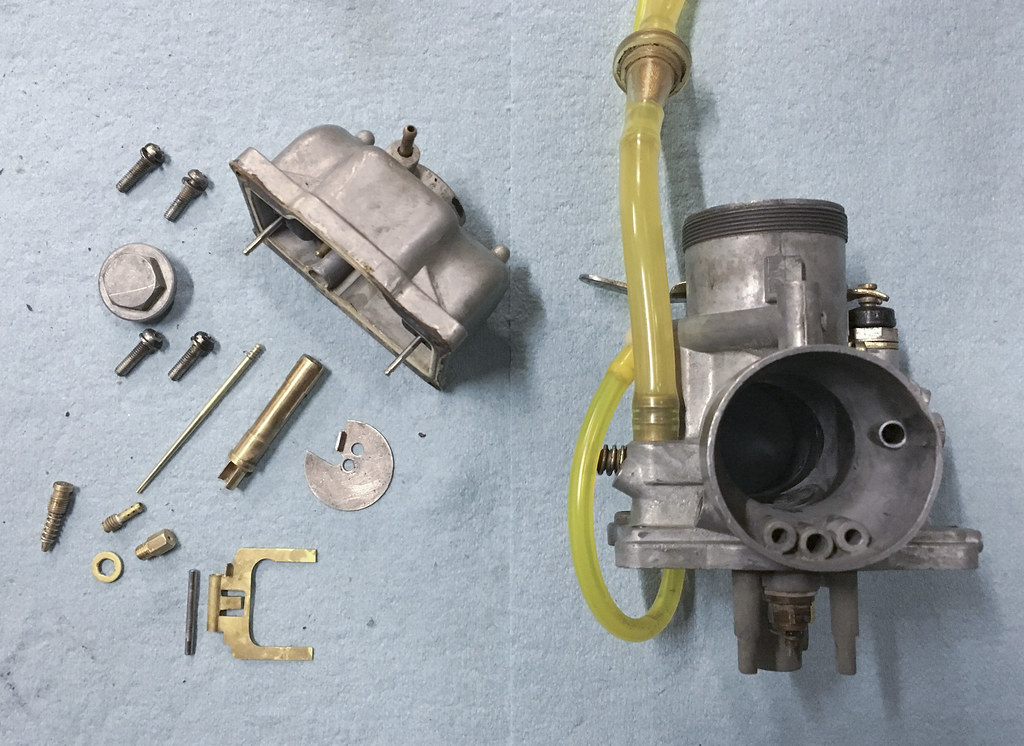 The only goofy thing I saw in the carburetor is the needle. It was missing the E clip so someone had used a stiff piece of wire to hold it in place. It seems to be working, but I'm going to get a clip so I can experiment with different needle heights. 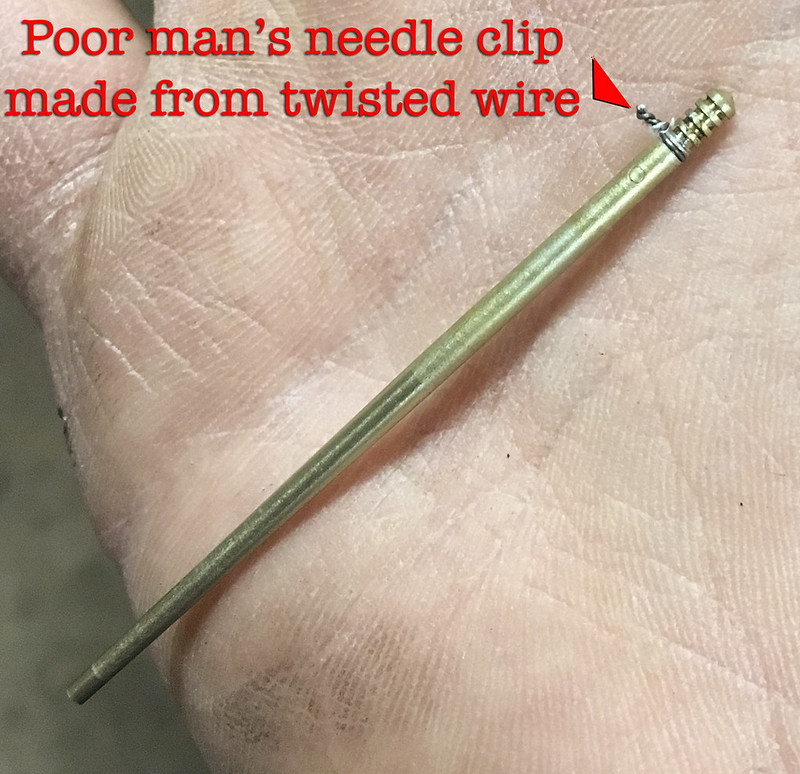 Here's a question. What does the air passage I've highlighted in red do? I sprayed carb cleaner in there and it just shot right back out the hole. I couldn't really trace it to anywhere else that it's supposed to supply air to. If this is plugged up, I'd love to free it up. 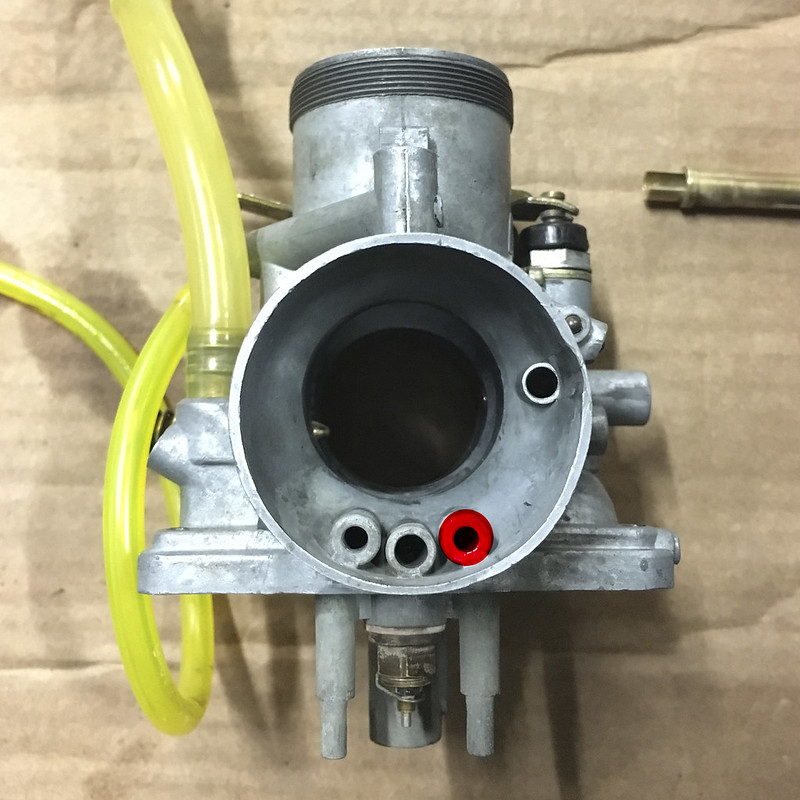 Next, the carb bowl gasket is torn in one place. I couldn't see on the carb body that this needs to seal against anything, so is this OK? 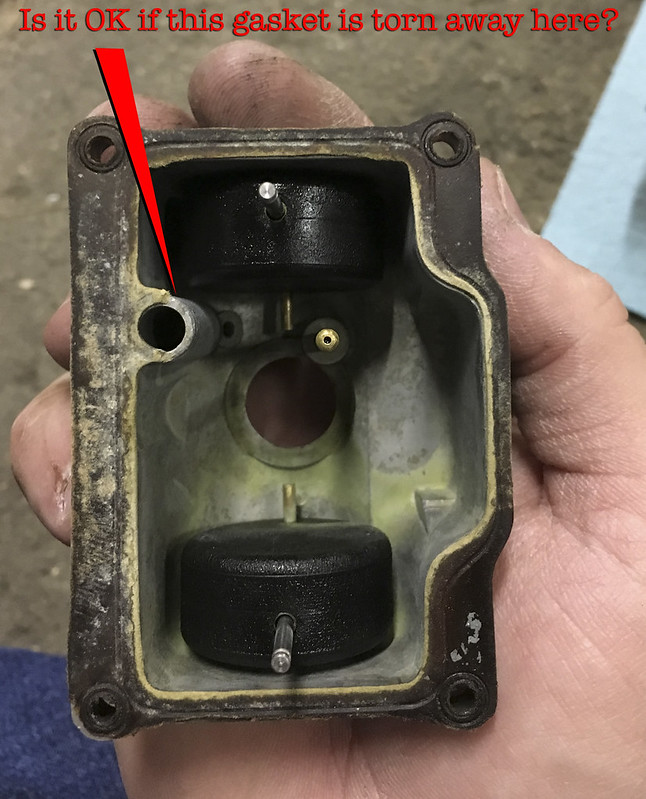 Finally, the intake joint ended up being cracked pretty deeply right by the carburetor side. I scrubbed the joint in dish soap and hot water and finished it off with brake cleaner. Then I smeared a thick layer of black silicone on the joint and let it dry. Then before leaving the garage for the night I smeared another thick layer on for good measure. The goal is to seal up those cracks so they can't turn into air leaks. 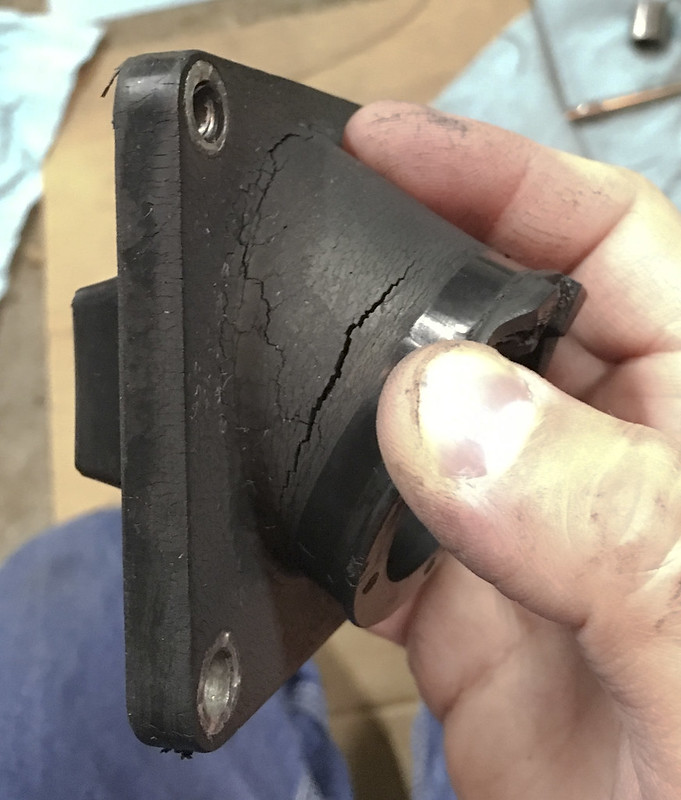 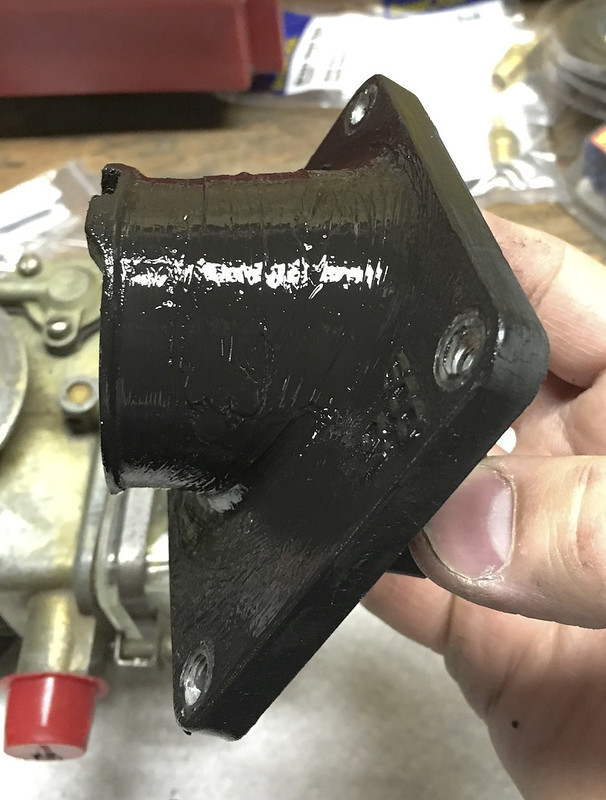 Finally, unrelated to the carburetor, I tested out the lighting tonight and it works great! The headlight is bright but not over bright. The gauges and tail/brake light are also working. I made another video showing the surging. This is after changing the spark plug out (and gapping it properly) for a B9ES. The previous owner had a B8ES in there. It was harder to start with the B9ES, but it's a colder plug. Since I'm not familiar with the bike yet I don't want to run a hotter plug in it so I'll keep the B9ES in there.

Posts: 526
Less More
Likes received: 237
Getting my DT400C up to snuff #6
The gasket for your float bowl is torn around the starter jet tunnel .
You might not draw sufficient fuel up the tunnel with the gasket torn like that ,
which may help explain some of your starting issues .
The following user(s) Liked this Post luv2stroke

Posts: 14
Less More
Likes received: 5
Topic Author
Getting my DT400C up to snuff #7
This morning I stopped by the Yamaha shop and picked up a needle clip. Then I set the needle height to position 3. The bike still runs similarly to how it ran before, but I did ride it further from home today. The silicone application to the carb joint worked well. The cracks aren't able to open up now and leak air.

Not the prettiest thing in the world, but it's fully functional now. 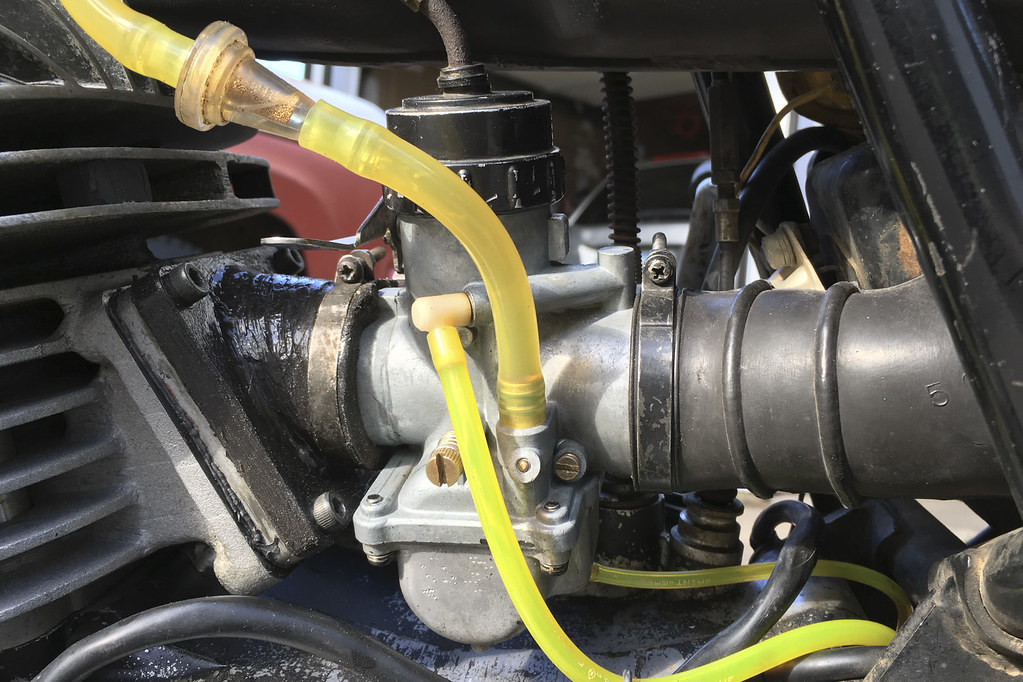 I pulled the exhaust off since it was just brown with surface rust. I wire wheeled and sanded it and then painted it with some black VHT paint. I've had good luck with VHT in the past with other bikes.

Even though it still bucks and surges when you're trying to maintain 45mph or 35mph or whatever when stuck in traffic, it's pretty fun to ride offroad.

Here's what it looks like now with the black exhaust. 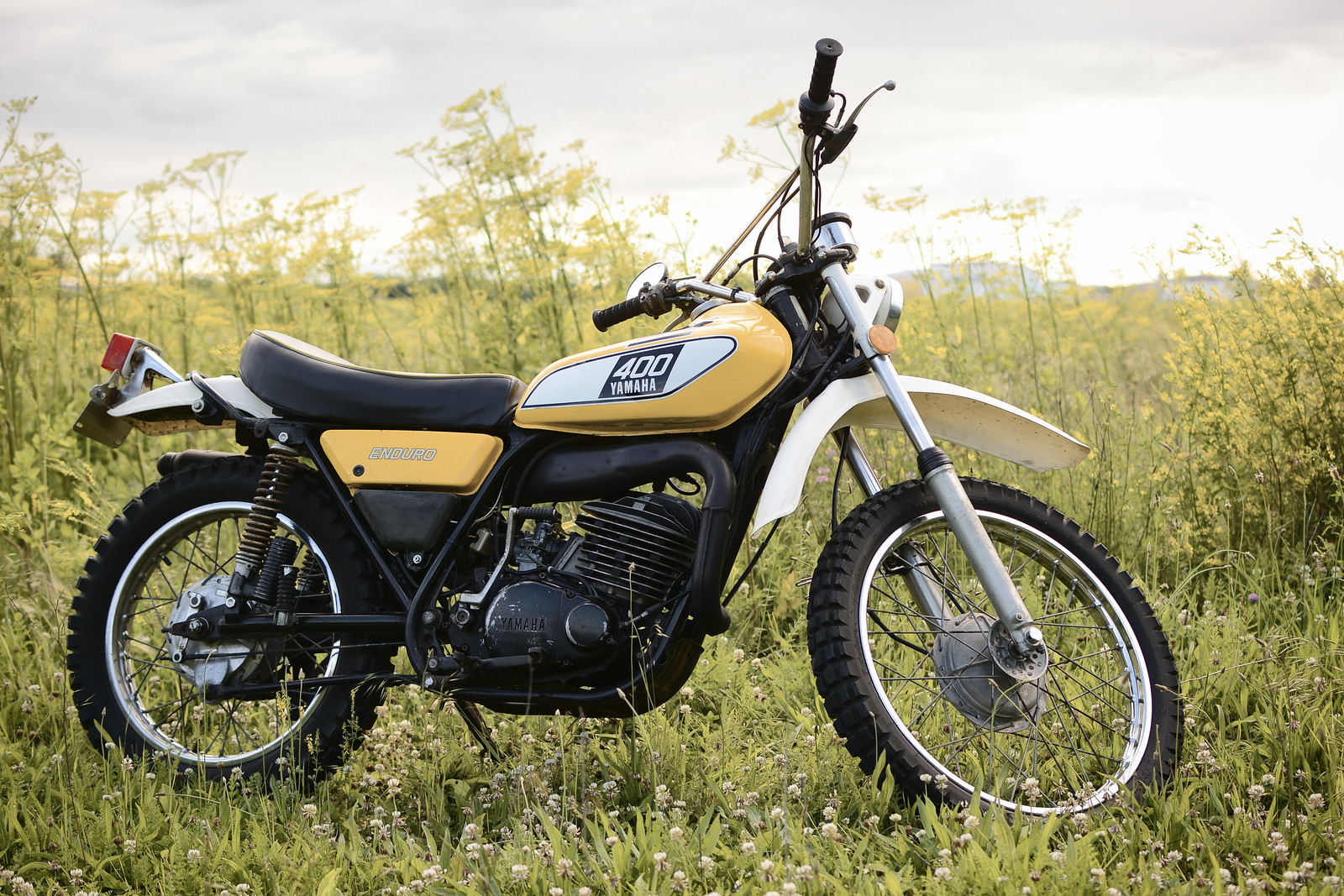 Not that this is the most scientific test, but I rode the bike pretty hard and rode home on the highway. It almost sounded like the cylinder was making some noises that weren't healthy so I hit the kill switch and coasted to my driveway to get a plug reading. I was probably riding at 3/4 throttle. The electrode looked maybe a bit lean but not super lean. 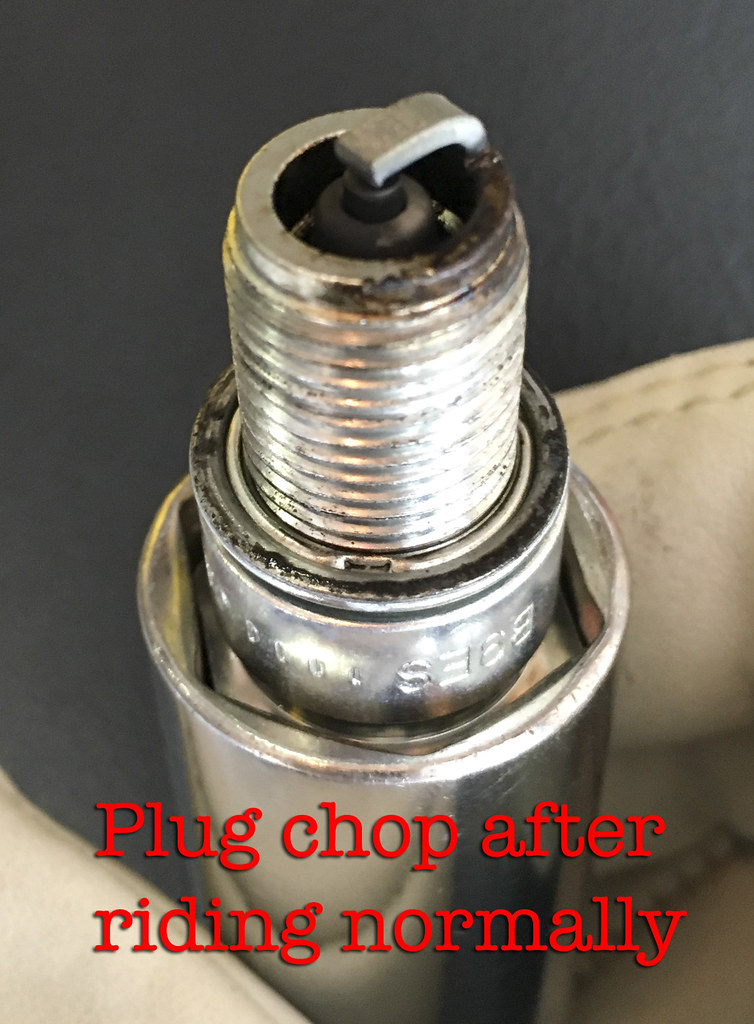 Then I also did a different test later. I held the throttle steady and let the bike surge for 30 seconds and then I hit the kill switch. If anything, the plug looks slightly rich. 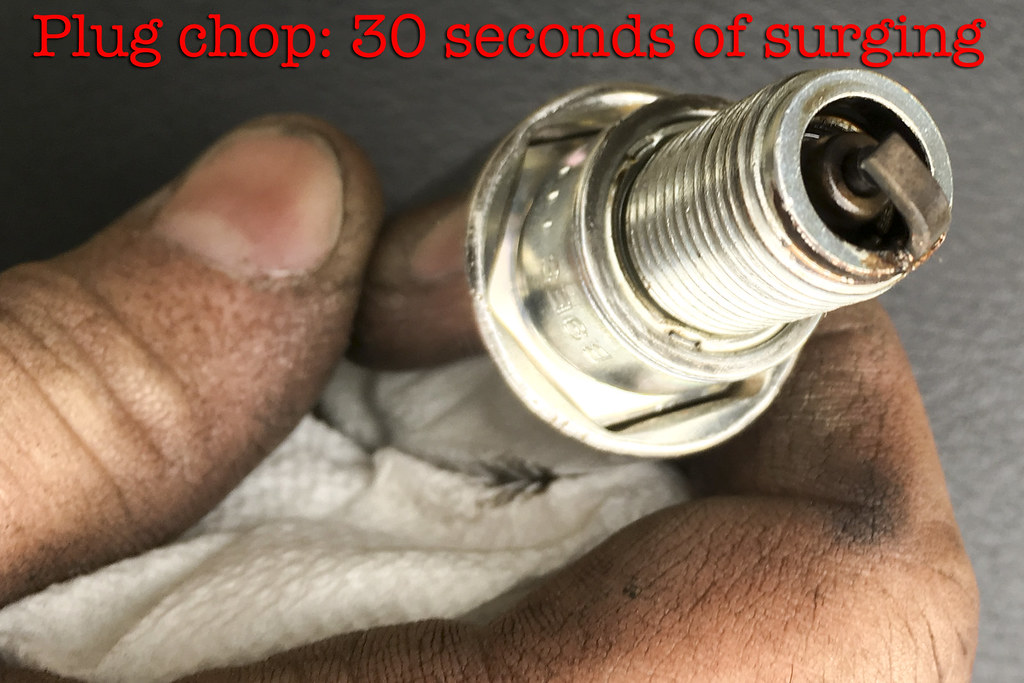 I know the definitive tests require new plugs. I own a ColorTune plug, so I'm probably going to use that soon in order to see what's going on. It's only half length reach so it might not work well but that will tell me my burn throughout the rev range.

Finally, I pulled the flywheel cover and confirmed that the bike has been converted to DT250 points, stator, and flywheel. 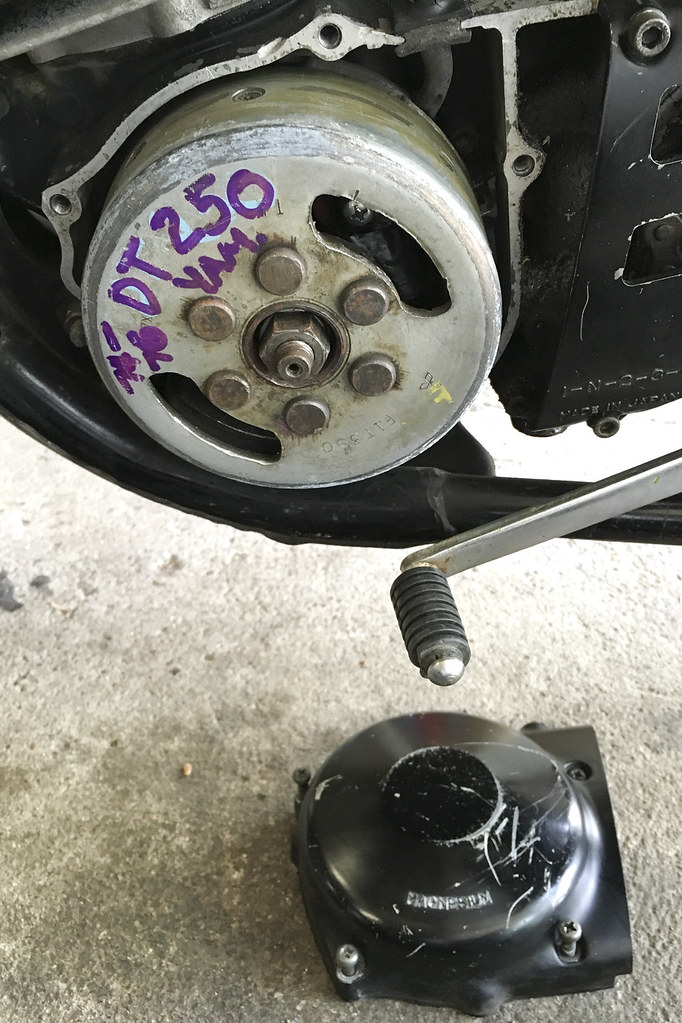 I got to go on a couple of mini adventures on a nice day though, so it was a successful day. 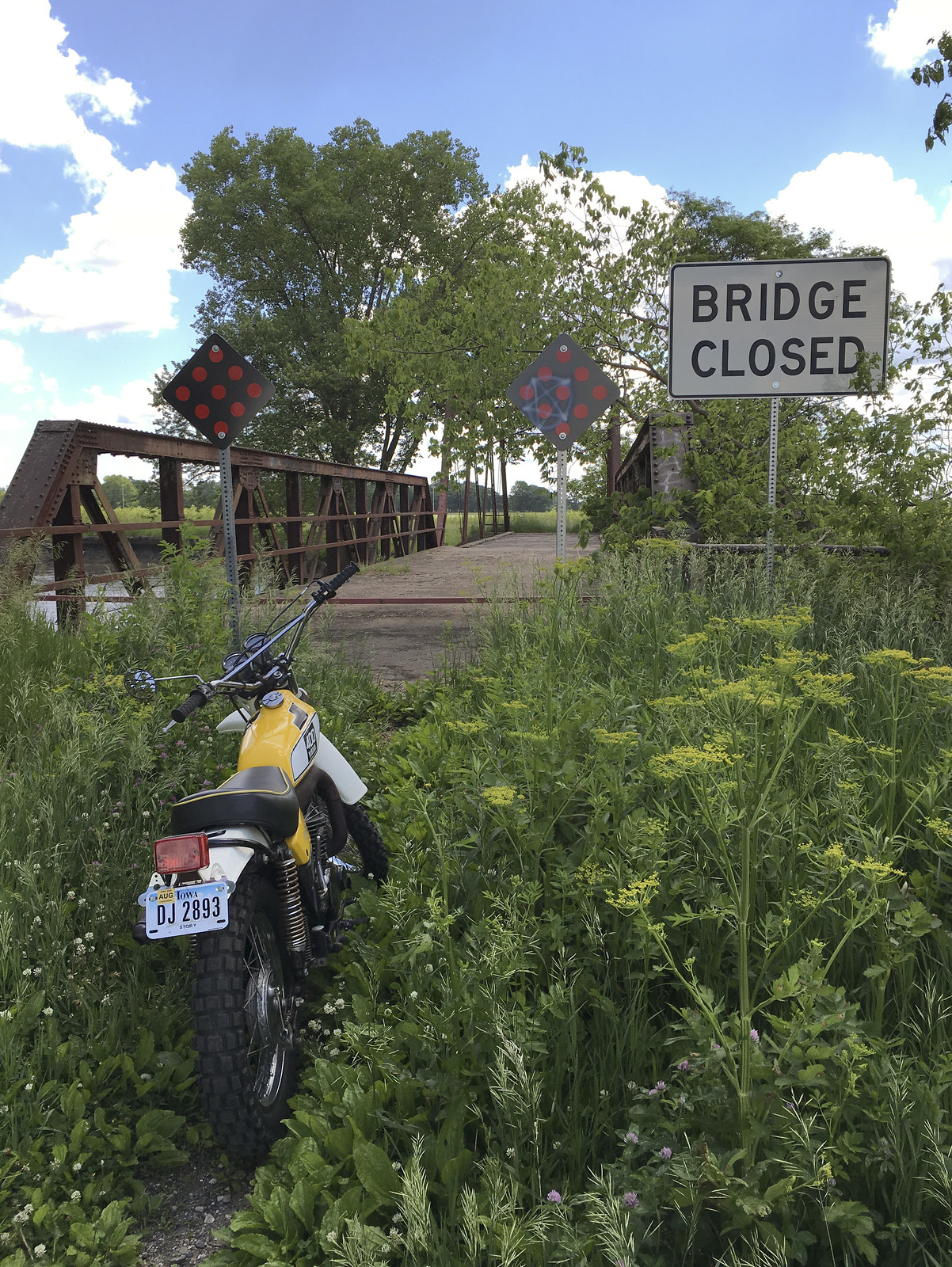 Posts: 796
Less More
Likes received: 254
Getting my DT400C up to snuff #8
Just for experimentation I'd try putting the clip in the top slot of the needle. That lowers the needle making it leaner which may or may not make it worse. Or better!

Maybe just one notch at a time!

Posts: 835
Less More
Likes received: 168
Getting my DT400C up to snuff #10
wonder if the pipes clogged, that'd be my luck if I just painted the pipe